For this pre-assignment, you will interview 10 people to understand their view on autonomous vehicles.

A majority of people interviewed own a personnal car. The following graph presents the results: 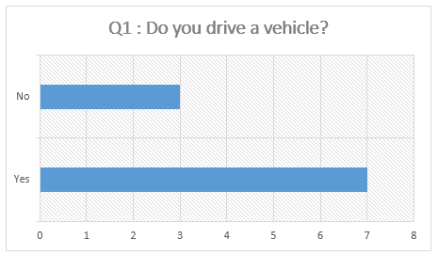 Furthermore, I’ve asked respondents what motivates their choice. Basically, people use their car on a daily basis for a transport purpose. In the other hand, students living in a city don’t drive a car for economical and environmental reasons and because public transports are more convenient. For more information, consult the subsequent table.

Q2 : Would you be interested in having an autonomous vehicle? Why or why not?

This question’s results are fascinating: exactly half the respondents are interested in having an autonomous vehicle ! 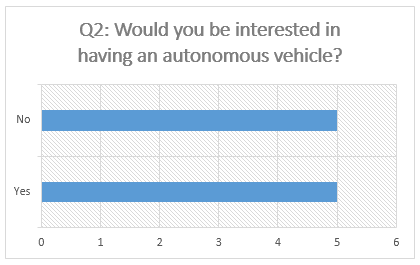 Since a picture is worth a thousand words, take a look at the following table displaying the YES and NO camps’ arguments.

Q3: What do you think are the biggest challenges facing the autonomous vehicle industry ?

After collecting all respondents perspectives, I realized their concerns could be classified in 4 categories: Technical, Social, Legal and Economical :

Q4: Do you believe that in the US by 2050, only autonomous vehicles will drive on roads ?

This time, all people interviewed share the same opinion: yes we’ll see more autonomous vehicles on roads in 2050 particularly for public and material transportation but human controlled cars will remain.

Hello dear reader of my blog!

I’m Eugénie Asselin, a 21 years old electrical engineering student at Polytechnique Montreal. I can be described as a dynamic and curious woman who likes challenges! In a work team, I like when the work is clear and well done. In addition, I have leadership: I like driving a team and giving new ideas. One of my main way of thinking is re-thinking: can we do things differently and thus better ?

My professional future is unclear at the moment: will I go in renewable energies, aerospace or autonomous vehicles? I don’t know but as long as I face challenges and use my brain, I’ll be fulfilled!

On a personal note, I’m really into sports and outdoors. I let the following picture speaks by itself: this is me looking at the Saguenay fjord on a bike-camping trip I did last summer :

When an autonomous vehicle crashes or has an accident of some sort – who is responsible, and to what degree? Consider the following story:

How should we divide up the responsibility for Carlos’ injury? Here are some immediate suspects: Alice, since she was the owner of the autonomous vehicle, and was using it at the time of the accident; Carlos, who was in the road when he shouldn’t have been; Bob, who sold Alice a car that had the aggressive setting(s).

In a blog post of 300-400 words, consider who the parties responsible for Carlos’ injuries are, and why they are so responsible. Given your assessment, what advice might you give to the manufacturers, owners or regulators of AVs to help address these types of issues?

The following analysis is based on readings and personal opinions.

First of all, we need to ask the critical question: Does a human driver, in same road conditions, would have hit the pedestrian, Carlos ? If yes, let’s call it Scenario 01, the only responsible here is Carlos who was illegally on the road. In my opinion, we cannot blame the autonomous car not to outperform real drivers’ performances. The following figure illustrates parts of responsibility in the accident for Scenario 01.

In order to answer properly this question, driving simulation must be done under the same road conditions with a human driver and car’s camera/sensors recordings should be analyzed. If in another hand, the answer to this question is no(Scenario 02), from my point of view, the responsibility is divided between the State, the car manufacturer and the car owner, Alice. To explain my position, I’ll analyze all parties concerned.

First, the car salesman. He’s to one who sold the car to Alice and he probably has no idea of the autonomous car technology in detail, so he has no responsibility.

Second, the State. In my opinion, the State is a bit responsible in a sense that if autonomous cars laws are unclear, it can lead to abuses and jeopardize civil security. Effectively, it shall establish a strict and clear framework for autonomous cars including laws and ethics. It has to be clear what are the car manufacturers’ responsibility boundaries and duties regarding civil security. For sure, a large ethics debate is required facing autonomous cars.  They will have to take decisions regarding lives value and in some unfortunate occasions, they will face/cause death.

Third, the car manufacturer. Even if the autonomous car respected driving laws (speed limits, road signs), for sure, he is partly responsible. According to the Three Laws of Robotics from the science-fiction writer Isaac Asimov, the first rule is :

I totally agree with his philosophy and think that autonomous car manufacturers shall keep it in mind meaning their cars shall not injured passengers, pedestrians and, why not, animals too. Therefore, in this situation, an aggressive and even more dangerous setting is not acceptable.

Finally, the car owner, Alice. She is partly responsible too. She is aware of her car settings and dangers associated to it. That night, she put the most aggressive setting on a wet road: she showed a lack of judgement. She has to suffer the consequences of her action so she won’t repeat it in the future. The figure below illustrates parts of responsibility in the accident for Scenario 02.

To conclude, this situation is neither black nor white. A lot os aspects have to be considered in order to make an informed judgement.

1) ESC: Electronic Stability Control. The intend of ESC is to keep the vehicle under control and on the road during emergency situations by using automatic braking of individual wheels. Since September 1st 2011, ESC system is required on all passenger cars as per the new Transport Canada Standard 126. For more information: http://www.tc.gc.ca/eng/motorvehiclesafety/tp-tp14651-vs200701-menu-738.htm

2) Lidar: stands for Light Detection and Ranging. A Lidar is a 360-degree sensor using light pulses to figure the distance between itself and obstacles.

3) Radar: stands for Radio Detection and Ranging. A radar is a sensor using radio waves to figure the distance between itself and obstacles.

5) Infrared Sensors : These sensors are more precise and they are utilized at night(low light) and in other circumstances to detect pedestrians, bicycles and lane markings.

8) GPS: stands for Global Positioning Systems. It uses satellites to determine vehicle position by triangulation. However, GPS is not very precise. In fact, its level of accuracy is 3.5 meters.

9) Controller Area Network (CAN): Highway of communication for all sensor microprocessors in the car. This type of network permits to broadcast many multiple short messages, for instance, temperature and speed, to the whole network.

10) Artificial Intelligence: “An autonomous car will rely on highly sophisticated computer processing to integrate and analyze internal vehicle operational data and roadway sensor data and then to determine which automated controls to activate and trigger them.” (J.GLANCY, Dorothy. Autonomous and Automated and Connected Cars—Oh My! First Generation Autonomous Cars in the Legal Ecosystem, Minnesota Journal of Law, Science & Technology, 2015.)

2. Select one type of technology and look at it in greater detail. How is it currently being used? What are its benefits and drawbacks? What is its future potential? Don’t forget to include references to any sources you may have used.

The technology I used to look at in greater detail is the Controller Area Network (CAN). CAN was introduced in 1985 for in-vehicle networks by Bosch. Before the CAN technology, electronic devices were all connected by wiring systems, which were heavy and expensive. In a simply way, we can say that CAN is a little internet internal to the car. All CAN devices have a CAN controller chip and see all broadcast messages. Then, they can decide if the message information is relevant or not. Data analysis and control are provided by Electronic Control Units (ECUs) which are embedded systems controlling electrical systems and subsystems in vehicles. Types of ECUs are Brake Control Module(BCM), Suspension Control Module(CCM) and Central Control Module(CCM).

Another CAN feature is message priority: every message has a priority level and the one with the highest priority will be transmitted before others with a lower one.

From a benefits perspective, let’s mention weight, cost and complexity reduction. The following figure presents the wiring economy allowed by CAN:

As mentioned earlier, CAN buses provide communication for all sensor microprocessors in the car. It permits to broadcast many multiple short messages, for instance, temperature and speed, to the whole network.

1.  SAE International has a formal classification system for autonomous vehicles, ranging from level 0 (not automated) to level 5 (fully automated). Briefly describe each of the levels.

Let’s mention first than active safety systems are excluded from the driving automation taxonomy because their intervention is momentary.

Also called “hands on”. The human driver and the automated driving system share some operational tasks (acceleration/deceleration, steering). A good example of this level is the Cruise mode, where the system monitors the speed and the driver is in  charge of the steering. All other aspects of dynamic driving tasks including monitoring the driving environment are in the hand of the human driver.

Also called “hands off”. In specific driving modes, the execution of steering and  acceleration/deceleration is ALL performed by driver assistance systems. The human driver is still responsible of monitoring the driving environment & intervening when needed.

Also called “eyes off”. Starting from Level 03, the role of monitoring the driving environment is now the system responsibility. Then, the automated driving system performs all the aspects of the dynamic driving task based on some specific driving modes execution. The human driver can safely turns his attention away from the road and has to respond to a request to intervene raised by the system.

During all the ride, from point A to point B, driving is all based on different driving modes. The system is active full time performing dynamic driving under all conditions (environmental, roadway) that a human driver can handle. The car can drive alone; a human presence is not necessary.

2.  Use the internet to find at least two examples of autonomous vehicles that already exist. Which companies/universities/groups are they from? What autonomous behaviour do they exhibit (i.e., can parallel park itself, can drive itself)? How have they been tested?

The car itself is produced by Fiat Chrysler and is improved by Waymo’s technology. It would be difficult for a human to drive it since the car has no steering wheel and floor pedals! It has covered millions of km already but only with internal employees. Now tests take place in real conditions in the streets of Phoenix where residents can try the autonomous car with an engineer and give him their feedback.

The upcoming Audi A8 will be able to drive by itself in some occasions like in heavy congestion on highway road: Traffic Jam Pilot is the name of the driving mode. Furthermore, the car will monitors the driving environment. When a human intervention will be required, 10 seconds of warnings will allow the human driver to concentrate on the road.

3)  Consider the SAE classifications from the question 1. At which level would each of the vehicles discussed in question 2 be? Provide rationale for your decisions.

In the first case, the Waymo vehicle is at Level 5 because it is fully autonomous and has even no steering wheel and floor pedals so a human can’t drive it. In the second case, the 2018 Audi A8 is at Level 3 because the car monitors the driving environment but still needs a human intervention in some situations.

4.  Please state at least 3 possible applications for autonomous vehicles, and why they would be beneficial for those applications.